On a cold day in January we worked for Gulf Coast Federal Credit Union in Alice, Texas. Most of the video work was shot indoors, but we also needed shots of the outdoor sign. When I steeped out to shoot the signage it was 39 and when I was done and got back to check it was 37. Sure, not cold numbers if you live up north, but for south Texas it was plenty chilly. 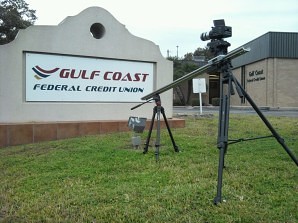 Thank you Gulf Coast Credit Union in Alice, Texas. We had a good time on the shoot and were glad we could shoot your commercial video this year.

Please call us for your next video shoot.

This site uses Akismet to reduce spam. Learn how your comment data is processed.